DRAYMOND GREEN AND HIS GROWTH MINDSET 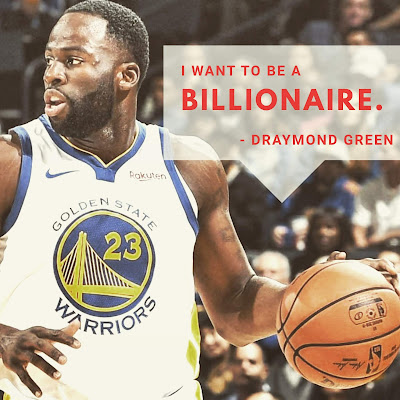 Whether you like him or not, Draymond Green has massive plans for his money.

For those of you who aren’t familiar with Green, he is a pro basketball player for the Golden State Warriors. He is making approximately $25mil per year, give or take. He’s also making a few million per year on endorsements.

Let’s say this adds up to $30mil just for our sake of understanding what the lesson here is.

If he continues to make money at this rate, it will take him over 33 years to hit the billion-dollar mark in terms of earnings. This doesn’t take expenses into account. He certainly can’t play basketball for 33 years.

So how is he going to become a BILLIONAIRE?

He INVESTS. He holds numerous investments in companies, most notably SmileDirectClub, which recently went public.

The overwhelming majority of athletes today do not invest their money. They believe they have so much money that they’ll never need to invest in anything. Draymond doesn’t think that way, and neither should you.

I know what you’re thinking. “Frank, Draymond is making $30mil per year. I’m making $50k. What am I supposed to learn here?”

No matter how much money you’re making, the principles never change. Draymond’s MINDSET is what you should gain from this.

Take a look at his social media. He isn’t showing off much of his stuff. I had to search his page to really find any signs of this, and I found very little material.

Imagine you made $30mil per year.

How many of you would spend it on things to impress people?

How many of you would show it off to everyone?

How many of you would never invest a dime of that money?

I would say 95% of people would do this - and that’s conservative.

Yet I see people doing this at EVERY income level. At least when you have $30mil you could afford a lot of luxuries in life. What makes you think you could do that at $50K per year?

The growth mindset is a major part of living a life dedicated to building wealth. If you want to be truly free and wealthy, you MUST take actions to GROW your wealth instead of DIMINISH it.

It’s great to finally see an athlete who has this growth mindset. Athletes have a major influence on people, especially younger generations. I pray that people take Draymond’s example in creating a growth mindset rather than a wasteful mindset.