Why are multibillion dollar corporations going after the shoe resale market?

I'll give you 30 billion reasons why.

According to Cowen Equity Research, the global shoe resale market could potentially reach $30 billion by 2030. The mass hysteria in the market has caught the attention of eBay, one of the world's top e-commerce platforms.

eBay has been running campaigns to get more high-end shoes on the platform and take command of the trend. The way that eBay plans to do this is to allow resellers to sell shoes without paying any eBay selling fees. 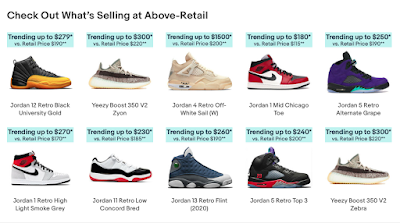 Based on this new policy, it is clear that eBay wants to be the go-to platform for the shoe resale market. eBay is attempting to incentivize sellers with larger profits while simultaneously connecting them with a large customer base of nearly 180 million buyers.

This sounds like a solid bet. eBay has partnered with companies that authenticate shoes, ensuring that sneakerheads can buy genuine, authentic merchandise on the platform.

It is often said that (at least) nine out of ten Rolex watches are fake. I would bet that this has already begun in the shoe market.

As the resale market continues to grow exponentially, it is unavoidable that fakes will be thrown into the mix and played off as authentic. Nonetheless, eBay is positioning itself as a trustworthy platform where sneakerheads have peace of mind to bid on their valuable investments.

These shoes are legitimately being viewed as investments today. I can't say that I disagree. This is what happens in a world of virtually zero (and negative) interest rates - people look to find value besides traditional investments.

Are we surprised that people are finding value in commodities like shoes? Bonds have extremely low yields with less and less certainty of payouts, and stocks are approaching unseen levels that are making people nervous. As a result, shoes have emerged as an alternative investment for many young people who actually understand the market.

I'm not sure about you, but this is an incredible development. When have we ever seen anything like this in history? We saw tulip mania back in the 1600s, we saw the initial Bitcoin craze in 2017, and we're now seeing the value of shoes skyrocket in 2020 and beyond.

We'll see where this goes from here.

Do you think this is a long-term trend or a short-lived fad? Let me know below!