A lot of people are angry. 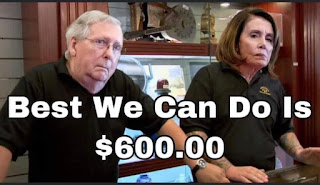 A lot of people are disappointed.

A lot of people thought the government was prepared to take care of them.

“This is their chance,” people are saying. “They have to help us.” Well, I’m not so sure.

Why is this “their chance” to do something? Also, what is it that people are expecting “them” to do?

It’s up to you. Not anyone or anything else.

There seems to be a fundamental disconnect between the people and the government. The disconnect that I refer to is more about the expectations that ordinary American citizens have of those who are clearly self-interested and self-seeking.

Ronald Reagan put it best when he cautioned us decades ago that ”The nine most terrifying words in the English language are: I’m from the Government, and I’m here to help.” People place blind trust in so-called “leaders” who have repeatedly shown that their interests are contrary to those who elected them in the first place.

Regarding this week’s stimulus announcement, there should be no surprise that Americans are receiving a stimulus check for $600. Did you expect anything better from people who are in bed with special interest groups, big corporations, foreign countries, and other groups that could give a damn about you or me, the American people? Politicians conveniently overlook “We the People” in their decision-making processes while in office. Rather, it’s “We the [Government].”

That’s why I chuckled when Congress announced a $600 direct payment to half of America. I wasn’t surprised by any means. In fact, I’m surprised they decided to give a single dollar to us peasants.

If you multiply $600 by 200 million (a fair estimate of the number of people who qualify for checks), this equals $120 billion. I’m not sure of the exact numbers (and I’m more certain that Congress isn’t sure, either). The stimulus bill that passed was over $900+ billion in spending. Where’s the other ~$780 billion going?

While looking for the answer, I found the actual document of the bill. The problem? It’s almost 5,600 pages (see above where I said Congress isn’t even sure what is included in the bill). If you have some time on your hands, knock yourself out and read it here.

However, I have seen some screenshots of the text of the bill, showing that billions of dollars are going to foreign countries, big corporations, special interests, and $10M to Pakistan for gender studies. You can’t make this up.

Surprised? Still a ‘no’ for me. It should be for you, as well.

While Congress is sending aid to foreign countries, we have over ten million Americans unemployed, over 100,000 small businesses permanently closed, and over 400,000 homeowners who are behind on their mortgage payments.

Must anything else be said? How does this help Americans?

The solution: stop voting for people who don’t have your best interests in mind. That’s easier said than done, because it seems like most politicians are failing to preserve the American spirit.

In that case, stop putting your trust into these people. Stop creating unrealistic expectations about people who sold you out and continue to sell you out on a daily basis. Be aware of the writing on the wall. Open your eyes.